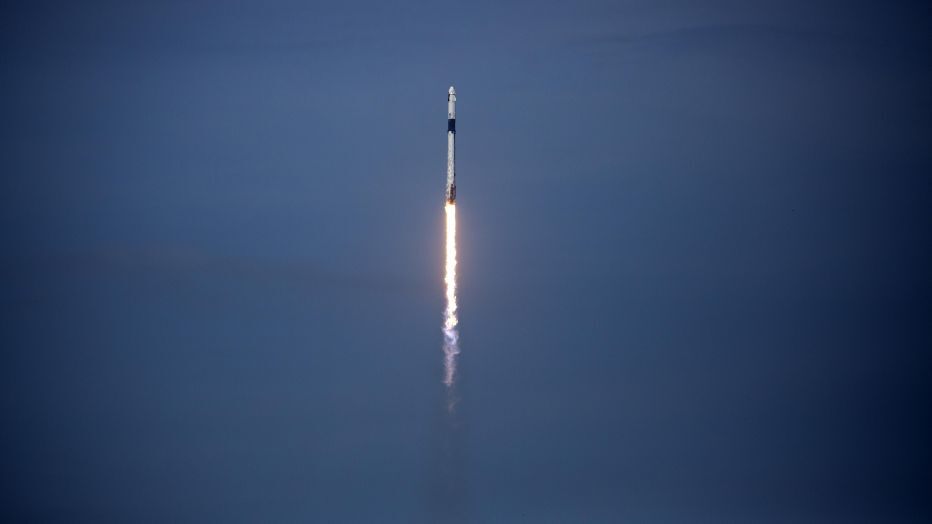 “The SpaceX Falcon 9 rocket launches into space with NASA astronauts Bob Behnken (R) and Doug Hurley aboard the rocket from the Kennedy Space Center on May 30, 2020 in Cape Canaveral, Florida.” – Fox 29 Philadelphia (Photo by Saul Martinez/Getty Images)

“The SpaceX Falcon 9 rocket launches into space with NASA astronauts Bob Behnken (R) and Doug Hurley aboard the rocket from the Kennedy Space Center on May 30, 2020 in Cape Canaveral, Florida.” – Fox 29 Philadelphia (Photo by Saul Martinez/Getty Images)

The Latest in Space!

The most prominent and recent space news has largely surrounded the SpaceX launch and plans. SpaceX is a private company that has been engineering, creating, and launching various spacecrafts and rockets since 2008. The company is owned by Elon Musk, who is pretty much known for making Teslas, being super rich, and nearly naming his kid the wackiest “name” I have ever seen in my entire 17 years of existence on this planet. I can’t even say it out loud because I have no clue how to phonetically sound it out. If you don’t know what I’m talking about or have not seen what this child’s name was going to be, all I can suggest is that you Google it so that you can read it. Enough about the name though. Back to space.

SpaceX recently made a little space history with its Demo-2 launch on May 30 of this year, which consisted of a vehicle known as the Falcon 9 Block 5, also known as the Crew Dragon spacecraft. The launch sent two astronauts, Douglas Hurley and Robert Behnken, to the International Space Station. According to Elon Musk and SpaceX itself, the ultimate goal of these kinds of missions that transport humans is to build on the achievements of their Falcon 9 and Falcon Heavy spacecrafts to bring to life “a next generation of fully reusable launch vehicles that will be the most powerful ever built, capable of carrying humans to Mars and other destinations in the solar system” (SpaceX).

In fact, SpaceX is already beginning to implement commercial human space travel through its Rideshare program, in which people can orbit around the Earth in a little rocket ship for a million dollars upward. So, I suppose that ultimately billionaires like Jeff Bezos could have the opportunity to see Earth from the outside looking in, even this year! Most recently, on Saturday, June 13, 2020, SpaceX launched its ninth Starlink mission, which brought 58 Starlink satellites and 3 SkySats by Planet, which are going to be used to generate images of Earth while in orbit.

SpaceX was actually not the only launch that occurred today, June 13, though. Rocket Lab, another American aerospace manufacturer, is headquartered in New Zealand and launched their “Don’t Stop Me Now” mission, named after the popular and absolutely awesome bop by Queen. The launch sent several small satellites into orbit, including a satellite known as ANDESITE (aka Ad-Hoc Network Demonstration for Extended Satellite-Based Inquiry and Other Team Endeavors). This particular satellite will conduct groundbreaking research on Earth’s magnetic field as part of a NASA program, and it will actually “initiate measurements of the magnetosphere with onboard sensors, later releasing eight pico satellites carrying small magnetometer sensors to track electric currents flowing in and out of the atmosphere, a phenomenon also known as space weather” (Rocket Lab). Those are a lot of big words, and personally, I am not much of a physics theory person, but if this sounds interesting to you, I will link more information for you to explore and read at the end of this article!

This makes me think about a couple things. First of all, how futuristic does this sound? According to one of the “Back to the Future” movies, society would travel in flying cars by now, and while such an invention has yet to grace the skies, the tangible possibility of space travel to Mars seems A) incredible and B) a little out there. The second thing my mind wandered to upon learning this was all of those young adult dystopian novels I read avidly as a middle schooler. There’s that saying that goes, “The future is now,” and while I can’t see the past vividly beyond history books and what my parents and grandparents tell me, it’s clear that although we have already progressed so far in terms of technology and science, innovation continues to push us forward into advancements we did not even realize were possible.

Now that we’ve discussed some awesome new space initiatives, let’s talk a little more about new and exciting discoveries. As some of you may already know, the Hubble Space Telescope serves to facilitate discovery and stimulate curiosity about the worlds beyond our own by seeking and capturing images of the galaxy and universe. Hubble is constantly asking new questions about space and stars, including their formation, location, and characteristics, and as they answer these questions, they are led to new discoveries and new questions. A query that the Hubble Telescope has recently been working on is the search for the universe’s earliest stars, known as Population III stars. These particular stars are thought to have been made from primordial elements like hydrogen, helium, and lithium, which are the first three elements on the periodic table. This is because those three elements were the only ones that existed before processes within the core of the Population III stars could yield heavier elements like oxygen, nitrogen, carbon, and iron. It was reported on June 3 of this year that a group of European researchers from the European Space Agency set off to look for these stars, looking as far back as 500 million years to 1 billion years ago but finding no evidence that the Population III stars existed during this time period. While they did not find the stars they were searching for, the ESA researchers found something else along the way that raises more questions and will facilitate further research. To sum it up, they developed a new imaging technique that allowed Hubble to observe galaxies of lower masses than ever observed by Hubble before, at a distance that corresponds to when the universe was less than a billion years old. This means that galaxies could have formed much earlier than scientists originally thought. NASA and the ESA continue to conduct research through Hubble to find more answers, and because this discovery is so recent, there’s not much more I can say about their hypothesis!

As I learned about this study, I realized that some of the information presented was going over my head, because I forgot about how by looking at the stars, we can look back in time like these researchers were. You might be wondering about that too, so allow me to clarify. The reason that we are looking back in time as we see stars or bodies in space at large distances is because of the speed of light. When something is a certain amount of light years away, this means that the light or image hitting our eye has been traveling for that many years. For example, the Andromeda galaxy, which is the furthest object visible from the naked eye, is 2.5 million light years away, so the light we see from it right now took 2.5 million years to get to our eye or is 2.5 million years old. I added a Forbes article in the references that is super helpful when trying to wrap one’s head around this.

Here’s another interesting discovery that Hubble published a couple months ago: a planet scientists were studying disappeared! The exoplanet, called Fomalhaut B, had data taken in 2004 and 2006 and was announced in 2008, clearly visible to the Hubble Telescope but definitely a little weird. Astronomers found it unusually bright in visible light while lacking any noticeable infrared heat being given off, and it had a very eccentric orbit. Soon, they began to notice the object continually fading over time in their images until in 2014, it seemed to vanish altogether. After this, researchers interpreted such an exit to mean that Fomalhaut B was actually not a planet, but in fact an expanding dust cloud that had resulted from a collision of two large bodies likely made of ice and dust. Talk about deception! That “planet” clearly had Hubble people in the first half, I’m not gonna lie, and pulled off quite the disguise, if you ask me, for about 10 years.

In 1609, Galileo created the first telescope and discovered that Earth goes around the Sun, and in turn, not everything revolves around us! Since then, horizons of space exploration have expanded to the point that technology can spot galaxies 13.4 billion light years away, and an orbit around the Earth can be as accessible as a Rolls Royce Sweptail (which is not very accessible but still sort of accessible for people who eat hundred dollar bills for breakfast). Regardless, I’m sure that when JFK gave his moon speech, which I think we’ve read in my English class every year, he might not have imagined what our reality is today in terms of space initiatives but would likely be proud of the great progress we have made. Space is cool! There’s so much we’ve learned and so much that is yet to be seen. As we continue to trek onward into the great unknown that is our universe, I’m sure the journey will be out of this world!