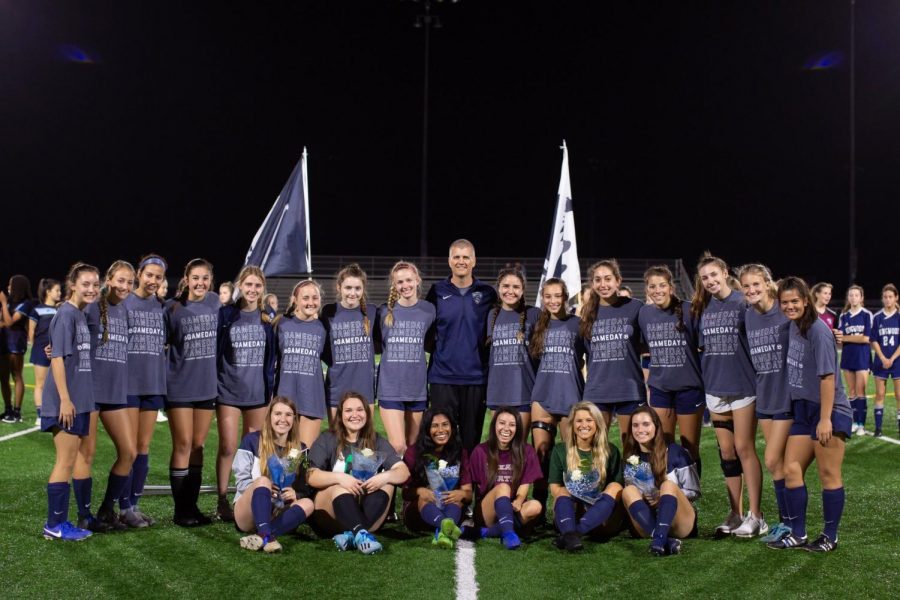 Lady Mustang Soccer season came to a halt with COVID-19 but it did not keep them from finishing strong.

Captains Emma Ebert, Alex Dumais, and Mikayla Carlos led the Lady Mustang soccer team to many victories throughout the 2019-2020 season. After a tough season, the girls finished out the year as district champions for the 30th year in a row and placed second in their region as they headed into play-offs.While there were many challenges thrown at the players this season, they persevered and worked even harder to obtain their district title once again.

Senior Captain Emma Ebert said, “It was one of the most difficult pre-seasons in all my years playing for KHS. We had a lot of challenges thrown at us. There were a lot of new players, we were playing the top teams in the state, and had just found out about Coach Holcomb’s illness. To top it off, we lost to Atascocita in our first district game, which is never ideal. As the season went on, we worked through these challenges and grew a lot as a team. All of these setbacks really opened our eyes to our goals and made us work even harder. In the end, we beat Atascocita at home and ended with the district title.” (Emma Ebert)

Having worked so hard through the ups and downs of the season, the whole team was definitely ready to prove themselves in the playoffs and hopefully make it to the state tournament, but those hopes were crushed by COVID-19 as all UIL events were cancelled for the remainder of the school year. While the players were upset not to be able to finish off their season in playoffs, the seniors were exceedingly disappointed as they had to come to the realization that their KHS soccer career had been cut short. Kingwood soccer is a family, and having playoffs taken away was not what anyone wanted  to hear.

According to Ebert, “Playoffs are the most exciting, competitive, and rewarding part of your season. It’s just sad to think that some of the seniors will never get to experience that feeling. It is also sad that the seniors played their last ever game without even realizing it. Even though it didn’t end the way I hoped it would, I don’t regret anything. Kingwood soccer gave me some of the best memories and friends. I made the most of my time at Kingwood and in soccer and achieved more than I could have ever could have ever imagined. I wouldn’t trade it for anything.” (Emma Ebert)

Overall, the ladies played a great season which they hope to improve upon in the 2020-2021 school year. As for next year, the team hopes to keep their streak and win the district title for the 31st year in a row. Rising senior Jenna Bodron says she “will play in [the senior’s] honor next year, and can’t wait to hopefully win district champs for the 31st year and go far in playoffs” (Bodron). We can’t wait to see all the amazing things these girls will accomplish next year!