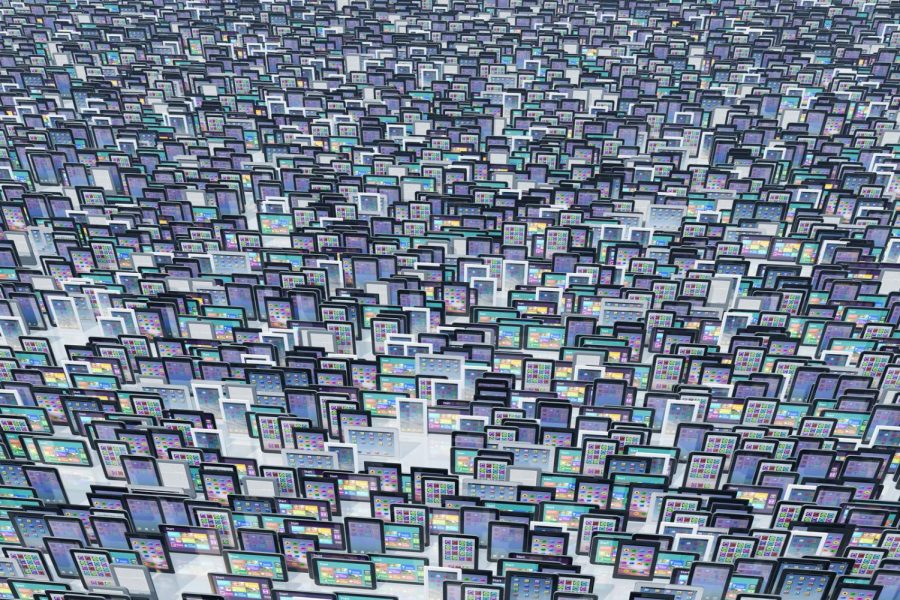 How does one filter, discern, and manage the open windows in their life streaming continuously?

Information Overload, How Much is Too Much?

News is everywhere. Whether we are in our homes or in our schools/workplaces, or we are on our phones or talking to people in person, new topics of conversation in regards to current events or global happenings arise constantly. In this new age of technological development, information about anything spreads at a breakneck pace and is always readily and abundantly accessible to all. In fact, we do not even have to actively seek out the latest news to receive it, however unexpected or unsolicited the content may be, because we often stumble upon news while watching TV, surfing the Internet, and scrolling on social media. When we do search for answers to our questions or further knowledge on topics we do not understand, the Internet provides us with a wealth of answers in the form of millions of results generated in a fraction of a second. To illustrate, when I typed, “What is information overload,” into Google and hit search, I received about 105,000 results in 0.65 seconds. Living with the world at our fingertips has opened doors of innovation and scientific advancement far beyond what people decades ago may not have imagined, but like most expeditions into new frontiers, opening these doors and becoming capable of accessing extraordinary quantities of information has impacted humanity immensely.

Information overload is defined as “exposure to or provision of too much information or data” by the Oxford Dictionary. I would consider that to be a pretty self-explanatory definition; however, the term “information overload” can also be used in the context of young people and adults being bombarded and overwhelmed with large amounts of information due to sharply increased access to news via the Internet and current technology. I’m interested in learning more about how information overload in this context impacts people my age. Many of the conclusions outlined below are now heightened in light of COVID-19. It has taken over our news platforms, and information about the pandemic and its implications is thorough and presented in large quantities. In addition, with social media rapidly becoming many teenagers’ most frequent and direct news source, news and information can cross the screens and eyes of individuals significantly more often than in the past. Over the course of the past year, I had heard many people express feeling more overwhelmed or exhausted of constantly being fed information through various mediums; however, I wanted to hear from people within my own age group on how information overload might impact them and conducted an informal survey to better understand what we face in this age. The results of this survey were generated within a population of 95 high school students and young adults across the United States and world.

Many young people today are at least slightly engaged in what is going on around them in the world, even if it is not completely by choice or personal merit. 65.2% of the students evaluated their own engagement in current events, politics, social issues, and other news as being high, and 61.1% also determined that they were typically very likely to actively seek out news from reliable sources themselves. This likely stems from both the efficiency of news spread and Internet searches as well as the diverse array of sources that information can be presented from as various mediums continue to develop and expand their reach. While the majority of students reported receiving most of their news from websites, Twitter, and television, they also expressed using podcasts, apps, the radio, social media apps like Instagram, Snapchat, and Tik Tok, magazines, and of course, the newspaper. Because the resources presented to us as news outlets have expanded far beyond the classic daily newspaper, information can often also bombard students without them looking for it or even realizing it. 35.8% of students approximated that they inadvertently see news about 5-10 times daily, while 26.3% only see news inadvertently 3-5 times daily and 25.3% see it more than 10 times daily. While the numbers of instances may appear to be smaller than expected, I only surveyed how often students believed they saw news simply appear in their daily lives without them having to look for it or actively read it for edification online. For the past year or two, I have often heard students express feeling like keeping up with the news today is “too much” and can feel overwhelming, so I tested this by asking my peers how overwhelmed they typically feel after reading about or watching news for an extended period of time. As I expected, 82.1% of the students polled said that they felt at least somewhat overwhelmed, and 65.4% of those respondents expressed feeling very overwhelmed.

With information constantly being released and available, new issues and happenings often crowd our own concept of time and certain events’ relativity to today in terms of how “far away” or long ago they feel to people. This can be demonstrated by the killing of Qasem Soleimani that occurred in January of this year. In the days that followed this event, this event and its aftermath were all that people around the world and most within the United States were talking about or covering on news sites and channels. In fact, teenagers even made a meme out of the prospects of a “World War 3”, stirring up an Internet craze surrounding the events as well. Although only a few months have passed since this time and these events, people largely forgot about it by February as new events occurred internationally and domestically and the news began to become crowded with information and coverage of the latest. I asked the respondents to my survey how far away the events of January 2020 felt to the present (March 2020), and 81.1% of students responded that the events felt like they occurred very long ago and much further away than they recalled or expected. This perceived distance from the present demonstrates how information overload can clog, in a sense, the passage of time and how far away certain events feel to people, regardless of how close to the present they may have occurred.

That was certainly a long round of statistics. You might even feel a little worn out just by the sheer amount of information that I just presented to you. Sound familiar? As you read this article or any article not only on Mustang Monthly but on any news site, more information is entering your line of vision and your brain than what your capacity to process information may be. According to J. Peder Zane in the New York Times (2015), “Google estimated in 2010 that there were 300 exabytes (that’s 300 followed by 18 zeros) of human-created information in the world, and that more information was created every two days than had existed in the entire world from the dawn of time to 2003.” That was 10 years ago, so there is no doubt that this amount has increased greatly since then. For some, this might seem like an overwhelming amount, and for others, this might feel like an awe-inspiring display of developmental prowess and might. While everyone can agree that this new age of information has greatly impacted humanity and our progress, whether this impact is helpful or detrimental is a matter of perspective.

The final question that I asked the 95 respondents to my survey was an anonymous free response question asking how access to technology and the Internet has impacted how much information they receive and how much news they regularly see. This question yielded many interesting and diverse responses. I have included a few of the more prominent answers students provided below:

“With the integrations of news/news links into social media sites and other apps where access to news is not the main purpose, I feel that news is much easier to happen upon or to have “forced” on you. Before, seeking out the news was an active choice: turning on the TV, opening a news source’s app or opening a paper. Now, users, especially on social media, see news all the time as a “side effect” of scrolling whether they wanted to or not originally. This also happens a lot on people’s Instagram stories (in my personal experience) as people repost/link world news they feel others should know about.”

“Access to technology has made me receive almost more information than I’d like. I love that it helps me stay informed because I wouldn’t be near as informed without technology, but sometimes there is too much fake news and rumors.”

“I do not regularly check the news on my own, and I don’t make an effort to be aware of political or social events (which is not something I’m proud of). So for me it’s kind of nice to just have those things brought to my attention on occasion so that I’m aware of what’s going on in the world. When I am just scrolling through social media, even on Instagram, videos about the government or environmental protests will pop up and it can be, as I’ve said, nice to have current events brought to my attention. But once you click on one of those, if you keep scrolling, more and more similar posts come up and it can get overwhelming to the point that i don’t feel like I’m learning anything and I just have to turn it off and take a breather.”

“It’s made us desensitized to issues that would’ve been taken much more seriously previously, like school shootings or global conflict. It has also made us as a generation seem a tiny bit hopeless in that these issues are so far away and we can only do so much to help. On the other hand, it has told us that voicing our opinions matters and that we can try to solve local issues on a much lighter scale, and make just as much of a difference.”

Overall, most people feel constantly bombarded by information and somewhat addicted to looking for news almost constantly on any subject they are following. However, opening the door to new sources and quantities of information has also allowed people to learn about topics they never would have heard of without the Internet or even information overload as a whole. It certainly is a blessing to be able to learn from, explore, and digest seemingly unlimited amounts of words, statistics, and stories on a far more extensive magnitude than our predecessors. At the same time, how much is too much?