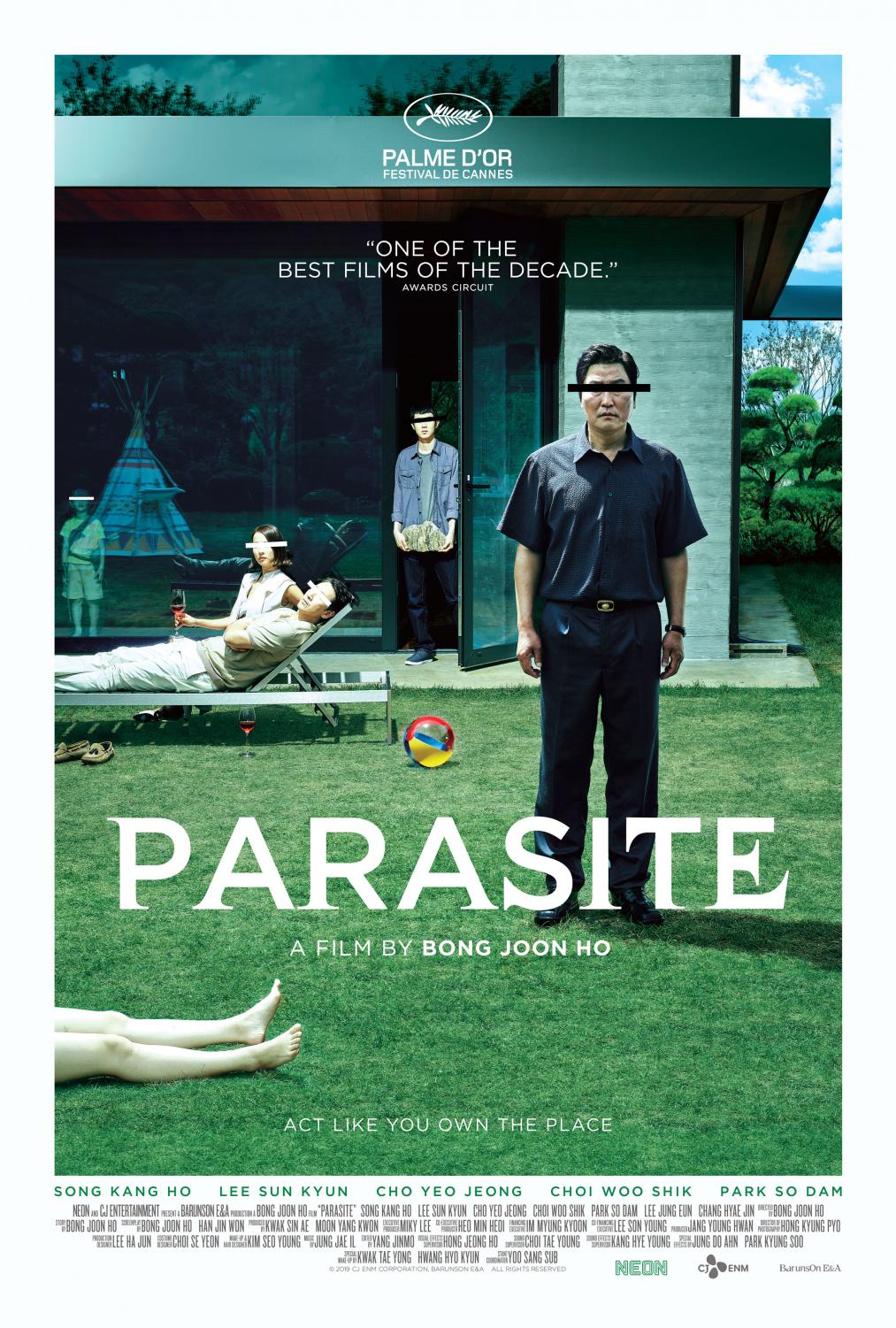 A poor family, the Kims, con their way into becoming the servants of a rich family, the Parks. But their easy life gets complicated when their deception is threatened with exposure. – IMDB

A poor family, the Kims, con their way into becoming the servants of a rich family, the Parks. But their easy life gets complicated when their deception is threatened with exposure. – IMDB

Parasite. The film that everyone has been talking about, especially after winning four (yes, four) Academy Awards and receiving critical acclaim across the globe, has been on my list for quite some time. When I finally got around to watching it, my only expectation was that it would be a movie that made me reflective simply because I had heard it would from friends who had seen it. Sure enough, I am writing this review in awe of the power of storytelling, and I definitely sat for a few minutes staring at the screen once the movie finished and the credits started rolling. Bong Joon Ho, writer, creator, director, and co-producer of the movie, quite literally did the most in crafting a story that was engaging, suspenseful, and original. He created characters that each had highly independent motivations, qualities, and behaviors while also cultivating and developing interdependent relationships between each of the characters using their independent qualities throughout the movie. It felt like each characters’ relationship with another was starkly different from their relationship with the rest, and Bong Joon Ho especially utilized the balancing acts across class differences and levels of intellect as a springboard to create the relationships and the storyline itself. Regarding the structure of the screenplay, the exposition was clear and concise, and it transitioned quickly and smoothly into the rising action, which consisted of increasingly suspenseful scenes that climaxed in an extremely high stakes clash of anger, disgust, cowardice, frustration, and fear. I won’t spoil it too much for you, but that certainly is a lot of emotion. The rising action particularly impressed me because of how each added occurrence not only raised the stakes for the characters, but each curveball thrown to the storyline was unique. There were many moments throughout the movie in which the story could have gone in several different directions, so numerous plot twists and turns characterized the rising action until an explosion of rising tensions and problems created the climax. Bong Joon Ho used tons of visual storytelling in his screenplay as well, and the ratio of dialogue or spoken plot to visual elements accelerating the plot was well balanced and allowed me, the viewer, to gain understanding of circumstances, context, and relationships as well as experience the elements of suspense fully, simply from observing facial expression, movement, and the scenery. One scene that stood out to me was what I will call “The Flood Scene”, and if you have seen or are planning to see the movie, you will know exactly what I am referring to. Beware of somewhat major spoilers, they are in the next few sentences. In this particular scene, the Kim family’s rapidly flooding home is juxtaposed with the Park’s bonus basement/bunker as visuals of Ki-jeong trying to keep sewage from spouting out of the toilet and the rest of the family scrambling for prized belongings and wading through the high water rapidly alternate with a depiction of Moon-gwang, the former housekeeper, dealing with her concussion and various other injuries and retching into the bunker toilet as well as her husband attempting to get free from the pipe he was tied to. There is no dialogue in this scene, but the devastation and helplessness of both the Kim family and Moon-gwang and her husband are very clearly conveyed as the scene rapidly alternates between the depictions of their predicaments. This scene is only one instance of Bong Joon Ho’s visual storytelling that he uses throughout the film, but it definitely is one of the most poignant ones. This visual storytelling also carries over into Bong Joon Ho’s fantastic direction of the film. I’ll say it again: he really did the most.

Parasite was a movie characterized by its suspense, and the sharp blocking largely contributes to such a suspenseful nature. Many scenes included moments in which the stakes were very high, and the precise placement, movement, and positioning of individuals during those scenes determined the direction of the story and created the precarious situation occurring. Instances of people running to just the right place at just the right time generated momentum in the scenes and made my eyes widen and jaw drop a little bit as I wondered if the secrets would be revealed or chaos would ensue at any second. My eyes were definitely reasonably wide during the majority of the film, and I could not resist pausing it a couple of times to sit and process what had occurred in the scene I had just watched.

It is truly easy to see why Parasite deserved and won so many awards and accolades. I could barely tear my eyes away and became so immersed in it that I forgot that I was just a kid watching a fictional story play out. I highly recommend that you see it if you have not done so yet; maybe you’ll walk away from it speechless!