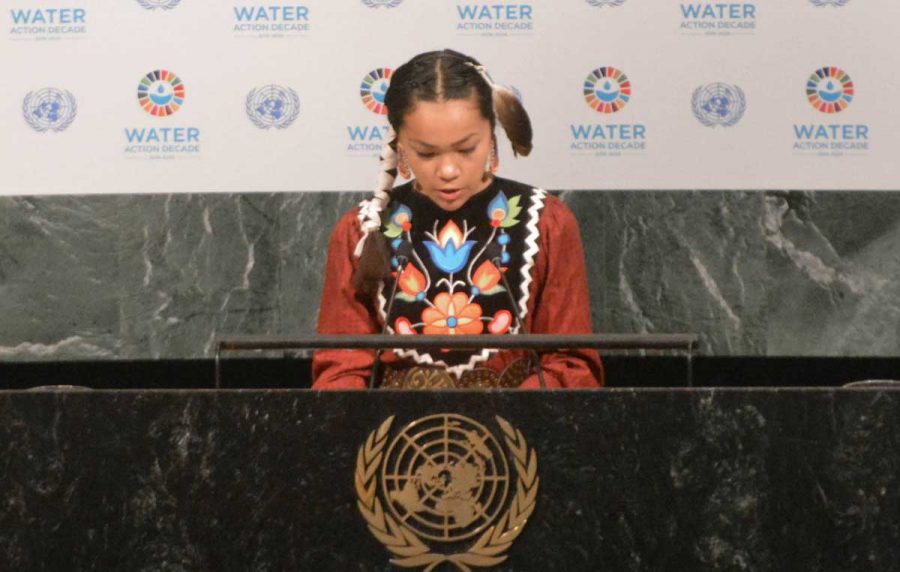 Photo Cred: Autumn-Peltier-UN; Also known as Anishinaabe-kwe and a member of the Wikwemikong First Nation and an internationally recognized advocate for clean water.

When a Tree Falls in the Forest, the Children of the World Hear (and Care)

Recently, Greta Thunberg has received great attention in the media as her “Fridays for the Future” school strike gained participants around the globe. These strikes have raised global awareness and drawn attention to the serious issue of climate change. However, she is not the only influential young environmental activist that merits recognition. Her peers include Mari Kopney and Autumn Peltier.

Mari Kopney, better known as Little Miss Flint, is best known for her work in raising awareness and working to alleviate the Flint Water Crisis. She began her activism at a very young age, writing President Obama when she was only 8 and asking him to help her community. They later received over 100 million in grants to help resolve the issue. Today, at 12 years old, Mari works with nonprofits and water filtration companies  to provide more affordable clean drinking water to her area. Recently, Mari has moved to broaden her activism including organizing school supply and clothing drives, and is even calling 2020 presidential candidates to hold a town hall specifically to address the issues most important to young people.

Another prominent activist is Canadian Autumn Peltier. Autumn is 15 and an indigenous clean water activist and a member of Wikwemikong First Nation in northern Ontario. In Canada, the construction and continuing expansion of pipelines has reduced the clean water supply, affecting many First Nation communities. At the mere age of 8, Autumn saw the drastic effect this had on her community and began to fight for universal clean drinking water alongside her aunt. She met with Canada’s Prime Minister, Justin Troudeau, in 2016 and was insistent that he do more to protect Canadians from unsafe drinking water. However, Troudeau continued to approve pipeline projects, further endangering indigneous communities. Autumn has also spoken out internationally, attending the Children’s Climate Conference in 2015. That same year, she was nominated for the Children’s International Peace Prize for her work as an official “water protector”. Autumn has continued to fight for the human right to clean water and raise awareness, especially through her address to the UN in 2018.

Around the world, students continue to fight to protect the environment, drawing attention to situations and issues that governments have not adequately addressed. When governments seem unwilling to act, young people have risen up time and time again to show that they will and won’t stop until things change for the better.