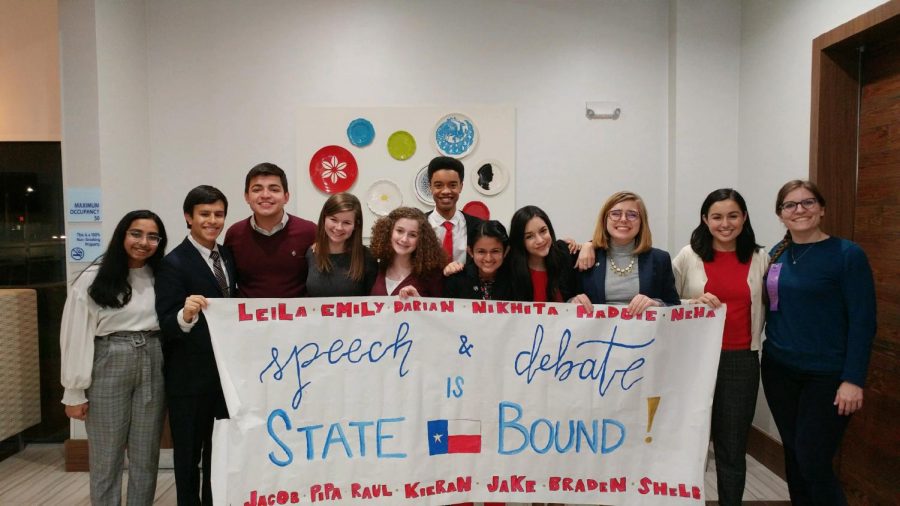 It was a successful year for the Kingwood High School debate team! After ending the summer with a National Championship in World Schools Debate by Seniors Emily Grantham and Leila Saklou, KHS debate members were excited to start the season. The year started off strong in the fall semester, when the team attended seven Houston area tournaments. Not only did the students attend, but they also brought back trophies for KHS. There was a total of 42 finalists, 8 of those championing various tournaments. In addition, Kingwood took home two 3rd place sweepstakes award and Overall Sweepstakes in Individual Events during the fall.

While the team was competing at home, other members were traveling the country and even debating on a global scale. Seniors Emily Grantham and Leila Saklou are two of the few members of the prestigious USA Debate team, and traveled to places like Croatia, Singapore, and Germany (among countless other cities in the U.S.), becoming finalists and earning speaker awards at many of the competitions. Junior Darian McCrary is a member of the highly Competitive USA Developmental team, and he also traveled to numerous cities across America competing in World Schools Debate. His team took second at the prestigious Cornell Invitational and championed the extremely competitive Blake National tournament. Back at home, members of the team attended the UIL Regional Congressional Debate Tournament.

With such achievements under their belt, the debate team prepared to travel across the country to showcase their skills and prepare for state. Over Presidents Day weekend, the team traveled to Boston to attend the 45th Annual Harvard Invitational Tournament. After returning, two teams competed at the UIL Policy Debate District Tournament, vying for a place at state. The teams took first and second including seniors Kieran Tillis and Jake Blizman, junior Shelby Smith and sophomore Braden Hopkins. Both qualified to UIL State and were able to compete amongst the top 32 teams in the state in Austin. Soon followed the National Speech and Debate Association (NSDA) Districts, which is the qualifier for Nationals in the summer. Sophomore Braden Hopkins took 3rd place in Informative Speaking, qualifying for Nationals. Sophomore Phillip Crane took 4th place in Humorous Interpretation, becoming the first alternate, and sophomore Maddie Duncan took 6th place in Program Oral Interpretation, becoming the third alternate. Along with that, Seniors Emily Grantham and Leila Saklou have automatic invitations back to the National Tournament due to their previous championship in World Schools Debate. After the district tournament, seniors Raul Diaz, and juniors Jacob Vasquez, Darian McCrary, and Pipa Powers applied to become members of the World School Debate team and were chosen to represent East Texas at Nationals this summer.

The state tournament was next up on the teams list. After 3 days of competition in Houston, the World School Debate team consisting of Senior Emily Grantham, Senior Leila Saklou, and Junior Darian McCrary were named first place in the state, becoming the first students in the history of TFA to be earn the title. The other World’s team consisting of senior Raul Diaz, juniors Jacob Vasquez and Pipa Powers, and sophomore Maddie Duncan earned 5th place. Along with that KHS took the top four speakers in the state, with senior Leila Saklou in 4th, junior Jacob Vasquez in 3rd, senior Emily Grantham in 2nd, and junior Pipa Powers in 1st, currently holding the highest speaker average in the world. In Individual Events, sophomore Braden Hopkins advanced to semi-finals, securing 7th place in Informative Speaking. Neha Shaw advanced to quarterfinals in Humorous Interpretation and junior Nikhita Ajaykumar advanced to quarterfinals in Poetry. It’s almost unheard of for a team to advance every competitor at the state tournament.

With TFA State out of the way, UIL was just starting. At the district tournament KHS took 1st place Speech and Debate Sweepstakes. KHS students cleared both sections of extemporaneous speaking, advancing all students to the region tournament. In Informative Speaking, sophomore Claire Sullivan took 3rd, sophomore Braden Hopkins took 2nd, and junior Xomie Sukach took 1st. In Persuasive Speaking, senior Leila Saklou took 3rd, senior Emily Grantham took 2nd, and junior Darian McCrary took 1st. Kingwood had 4 finalists in Prose and Poetry as well. The UIL Regional Tournament was the last tournament for the KHS Speech and Debate team this school year. Our school is so proud of these Mustangs, and make sure to wish the members attending the National Tournament in Dallas this summer the best of luck.