Red (Taylor’s Version): The Impact of the Re-Recordings 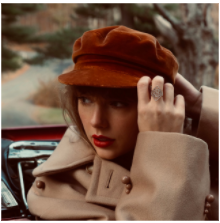 Big Machine Records has faced controversy due to Scooter Braun’s acquisition of the label, resulting in his ownership of Taylor Swift’s master recordings of her first six studio albums, which he sold. Swift has unveiled that she will be re-recording all of the albums stolen from her to gain back ownership of her songs. Each re-recording will feature the original tracks on the album, with additional vault songs cut from the original release. They will all display a new cover art as well. Fearless (Taylor’s Version) was the first to be released on April 9, 2021. Fearless was the album that initially gained her traction at the near beginning of her career in 2008. The re-release was a huge success, topping charts globally, overriding the original, and giving Taylor the ownership of the album she was fighting for.

Red (Taylor’s Version), the re-recording of Swift’s 2012 album, Red, was released on November 12, 2021. Red (Taylor’s Version) was the second release of her efforts to regain her masters. While the original deluxe album had 22 songs, the re-release has 30 songs. It features collaborations with Phoebe Bridgers, Chris Stapleton, Gary Lightbody, and Ed Sheeran, some never heard before. The album showcases nine vault songs, including the ten-minute version of her powerhouse ballad All Too Well. This song is a longtime fan favorite and has become increasingly popular since the release of the extended version. Listeners speculate about who this story is written due to the specifics of the lyrics. Swift published a short film for the song, starring Sadie Sink and Dylan O’Brien. This production is a beautiful display of the meaning behind the music and received rave reviews. Swift also released a music video for I Bet You Think About Me, featuring Chris Stapleton. This piece was the directorial debut of star Blake Lively.

Red (Taylor’s Version), the way Swift intended it to be, is an emotional journey through heartbreak and loss and the growth resulting from the process. The first song, State Of Grace, is a strong opener with a catchy beat. The songs are placed in order intentionally. For instance, the song 22 is following All Too Well because Swift had a hard time while she was 21, and the song 22 is a celebration of turning away from that chapter in her life. The inclusion of Ronan and Forever Winter is Swift’s mourning. The album ends with the ten-minute version of All Too Well. The story that this album tells is relatable and heart-wrenching. In the nine years between the original release of Red and the re-release, Swift’s voice has matured, and she seems to be in a happier place in life. These changes show the progress she has made as an artist and as a person.

While Swift did not originally intend to re-record most of her studio albums, the process has proven necessary for the music industry. The re-recordings of Taylor Swift’s masters are encouraging more artists to speak out and have a widespread discussion. Swift has sparked a meaningful conversation on ethics, intellectual property, and artists’ rights.