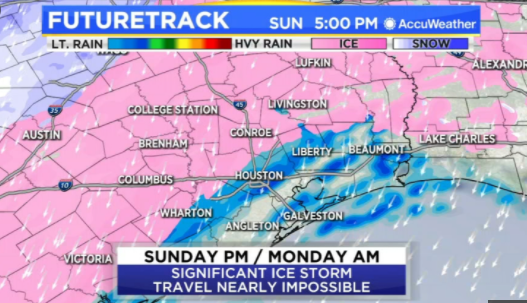 As announced on Friday, Humble ISD buildings will be closed on Monday 15th due to the winter storm approaching the Houston area. Many people may think of the South as a relatively warm-weather paradise where many northerners can escape the cold weather during January and February, hence, the approaching storm may sound surprising to many.

The next few days will bring the coldest temperatures seen in Houston in 30 years, with a broadcast of low temperatures hitting 10 degrees Fahrenheit. However, is it unusual for us to get this kind of weather during this time of the year? According to weather experts, it is not as surprising as many may think.

Winter storms usually form when dry, cold air from the Arctic moves south and interacts with warm air coming up from the Gulf of Mexico. As explained by the Weather Channel, this weekend, Houston will experience arctic air from Canada and Alaska meet with the subtropical jet stream from the Gulf of Mexico. The southern air will bring moisture and once this air interacts with the cold stream coming from the north, Houston could get snow, ice, or freezing rain. Hence, winter storms are not as uncommon as one may think, especially when considering the fact that most cities in the South get snow at least once a year.

Although the broadcast may change in the following days, remember to drive safely if you need to go out and try to stay warm and dry.