The Presidential Election Pulled a 2020 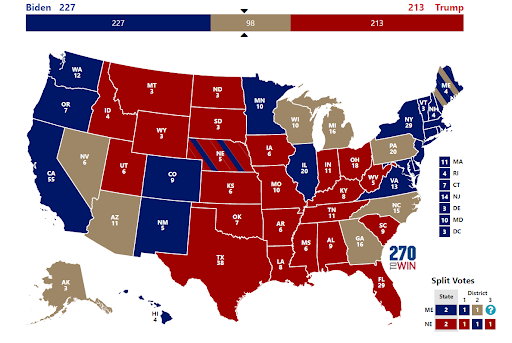 Map Credits: 270toWin Note from the author: "This article was written late into Election Night and will be updated as new information is released. The high volume of mail-in votes has delayed results; however, it is critical that every vote is counted."

I think we can all agree that 2020 has been a year like none other. The Presidential election followed suit. Many key swing states including the 3 swing Great Lakes States (Michigan, Wisconsin, and Pennsylvania) are still up for grabs. At the time of writing this, Biden holds a 227-213 projected Electoral College lead. Both candidates have much to be optimistic about and have had major successes. In this piece, I’ll break down each candidate’s respective victories and their paths to 270 Electoral Votes.

To start, President Trump should be heralded as a magician. He has once again tremendously outperformed the polls. Going into Election Day, the consensus showed that he was trailing in Florida and North Carolina while barely leading in Ohio and Iowa. He ended up winning Ohio by 8%, Florida (a traditional battleground) by nearly 400,000 votes, and Ohio by 8%. He may have a slim path to reelection, but he has yet to lose a state from his 2016 map. Despite being the underdog, no one should count him out. His admirable performance among Latino and African-American men along with his core base of White non-college educated men have driven many victories thus far. If he’s able to keep this up, expect some surprises in the coming days. He’s delivered the Senate to Republicans. The White House is not out of reach.

Many of Joe Biden’s supporters are very nervous. They trusted the polls and dreamed that states like Texas could turn in their favor in what would be a “blue wave” election. These heightened expectations have only brought disappointment. But if one looks at Biden’s performance from a moderate view, he is actually performing quite well. He holds a solid 7 point lead in Arizona (with 78% reporting) and is within striking distance in Georgia despite many Atlanta-area votes yet to be counted. For context, these are both traditional pre-Trump era Republican strongholds. Additionally, his improved performance in the suburbs compared to Hillary Clinton is a good sign for Democrats long term. The Rust Belt may lean towards President Trump now, but many mail-in ballots have not been counted yet. Despite losing many swing states, Biden is still the clear favorite and has more paths to the presidency.

How Trump Can Win:

Takeaways: Trump needs Pennsylvania. It is his firewall. He’s been there A LOT this election cycle and values it more than any other state.

How Biden Can Win:

Win Arizona, Michigan, and Wisconsin: Biden is leading comfortably in Arizona. His strong performance in Minnesota could translate to similar results in Michigan and Wisconsin.
Win Arizona, Georgia, and Michigan/Pennsylvania: Georgia looks to become a close race once the dust settles. Arizona is strong for Biden at the time of writing this. Biden should be able to hold 1 of the 2 big Rust Belt States.
Win Georgia, Michigan, and Wisconsin: Same scenario as #1 except relying on a shakier Georgia race instead of a solid Arizona one.

Takeaways: Biden has easier paths to 270, but isn’t guaranteed to get there.

It wouldn’t be 2020 if there wasn’t some twist in this election. Buckle up, it’s gonna be a day or two before we have a winner. Please be civil with everyone, even if you disagree with their politics. Politics is very important, but our sense of community and spirit should not be thrown out the window for it.