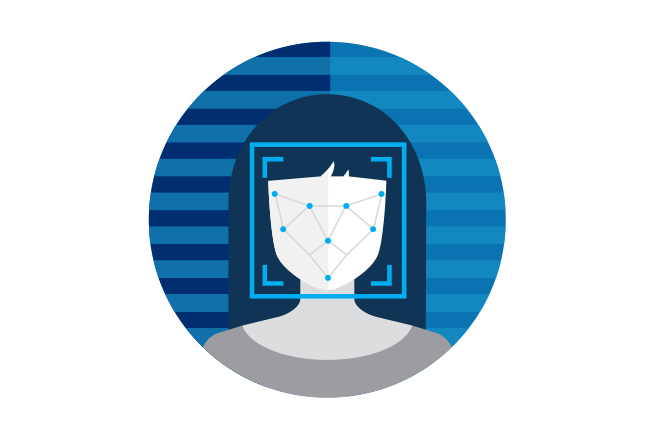 Graphic depicting a facial scan through a facial recognition system.

You wake up. It’s too early.

You brush your teeth, wash your face, eat some breakfast, and then grab your stuff and head out to go do what you need to do. Along the way, you might be holding your phone and you raise it up to check for new messages or posts on social media. It unlocks with a simple glance.

There’s a lot of cool and innovative technology in our world today that we accept as normal, but the development of these technologies is incredibly complex and we often take these things for granted. Sometimes, we might not even understand how or why these things work and any issues that may occur. It’s incredibly important to be technologically literate and understand the benefits and drawbacks that come with increasingly advanced technological innovations and how they play a role in policymaking as well as the ethics of technology. Where do we draw the lines when it’s become so blurred?

What is Facial Recognition and How Does it Work?
Facial recognition is a way of recognizing human faces via technology and is widely used. Facial recognition systems use biometrics. Biometrics are simply a way to measure a person’s physical characteristics for identity verification, and these can include either physiological traits (fingerprints) or behavioral traits (think those security puzzles asking you to identify which photos have cars in them and so forth). The facial recognition system uses this analytical information to map out a person’s features from mediums such as photographs or videos. These systems use computer algorithms to pick out distinct details on a person’s face, such as eye distance, jaw structure, eye shape, etc.  The system then takes this information and converts it to mathematical representations before going into a database with “known” faces (faces that have been mapped before) to find matches. Some challenges that are often found with facial recognition technology is working with facial expressions, poses, aging, and resolution of photos or videos.

A lot of people and organizations have turned towards facial recognition to enhance the accuracy and efficiency of their tasks/roles or product features. For example, the U.S government uses facial recognition at airports to identify anyone who has overstayed visas or those under criminal investigation. Mobile phone companies, such as Apple, Samsung, etc. have added a facial recognition feature in their newer phone models as a way to unlock your phone. Facebook also uses a facial recognition algorithm to identify users on its platform. When uploading photos to the social media platform, Facebook gives users an option to tag people in the photos, and selecting yes will often lead to automatic tagging (with a 98% accuracy rate).
Benefits of Facial Recognition
There are some benefits that come with the usage of facial recognition. The most “convenient” one being the ability to unlock your phone simply by staring at it. However, there are also other benefits as well.

With facial recognition, there comes an enhancement in security, which makes it a lot easier to track down burglars or other criminals through surveillance videos. On a much larger scale, this technology can be used to help the government identify terrorists via a simple face scan. This technology makes security identification and criminal investigation a lot more efficient and eliminates manual identification, which could be biased and sport far lower accuracy rates than computer identification.

Concerns and Drawbacks of Facial Recognition
While facial recognition has made it convenient for us to unlock our phones or laptops if we wish to do so and has boasted higher efficiency and accuracy when dealing with security or criminal investigations, there are quite a large number of concerns and threats regarding facial recognition.

There have been many concerns with the lack of consent and privacy of facial recognition. More likely than not, your data has been collected and stored in a database already without you knowing. The US government has already stored the facial data of a number of citizens without their knowledge. Anything you upload onto the internet with your face could be stored by anyone without your knowledge. This brings in the question of ethics and privacy in technology. Where do we draw the line?

According to the “contact hypothesis”, people recognize faces of their own race more accurately than faces of other races. This poses an issue when developing the computational algorithms used in facial recognition systems. In 2015, only 18% of computer science bachelor’s degrees were awarded to women and in 2016, only 7.8% of masters in science and engineering degrees and 5% of science and engineering degrees were awarded to minority women, meaning the vast majority of higher education degrees in these fields are held by white men. This lack of diversity is extremely problematic when these men compose the demographic of researchers who are developing these algorithms and can lead to racial bias in the algorithms themselves — whether intentional or not. The way to identify differences between people through mathematical expressions varies across races and genders and so while facial recognition may be accurate in detecting white men, the accuracy of these systems is a lot lower for minorities and women. In a 2012 study conducted by the FBI, the accuracy for recognizing African Americans was lower than that for other races. This can lead to false criminalization and charges and only further reinforces the disproportional effects of the criminal system on people of color. Some argue that having a manual verification system can counteract potential errors made by the computer algorithms; however, lack of diversity and specialized training along with inherent/subconscious racial bias can impact the “match” decision.

A study done by the NIST (US National Institute of Science and Technology) found that most one-to-one systems produced higher false-positive rates for Asian and African-American faces than Caucasian faces sometimes by a factor of 10 or even 100 — meaning it was more likely to find a match, even if there wasn’t really a match in faces. The study also found that algorithms developed in the US were consistently suffering when matching Asian-American, African-American, and Native American faces and among these, Native Americans suffered the highest false-positive rates. African American women had the highest false-positive rates which means they were most likely to be charged for a crime they did not commit. The NIST study was one of the most comprehensive studies to date, and is one of many that has raised the question: should these systems still be used so widely?

Recently in June, Robert Julian-Borchak Williams was arrested by the Detroit Police Department and spent over 30 hours in jail for “shoplifting $3800 worth of timepieces” — a crime he had not committed. When shown the security footage, the African American man shown was clearly not Williams — the computer algorithm had produced a false positive.

So, What Does All of This Mean?
Sure, there are a few benefits to facial recognition. However, there have been far more consequential issues regarding facial recognition technology — especially for women and minorities. It’s up to policymakers to decide where to go from here. Regardless of your stance on the usage of facial recognition, it’s incredibly important to recognize its benefits and flaws and how they impact certain communities as well as your privacy and rights, and it’s clear that there is still more research that needs to go into developing these algorithms and it’s an issue that can’t exactly be fixed right away.

DashMagazine. “The Threats and Benefits of Facial Recognition: What Should We Know?” Medium, Becoming Human: Artificial Intelligence Magazine, 5 July 2019, becominghuman.ai/the-threats-and-benefits-of-facial-recognition-what-should-we-know-17008f69ae74.

Johansen, Alison Grace. “Biometrics and Biometric Data: What Is It and Is It Secure?” Official Site, Norton, 6 July 2020, us.norton.com/internetsecurity-iot-biometrics-how-do-they-work-are-they-safe.html?inid=nortoncom_isc_iot-how-facial-recognition-software-works-ReadMore-internetsecurity-iot-biometrics-how-do-they-work-are-they-safe.html.