Texas May Be Turning Blue 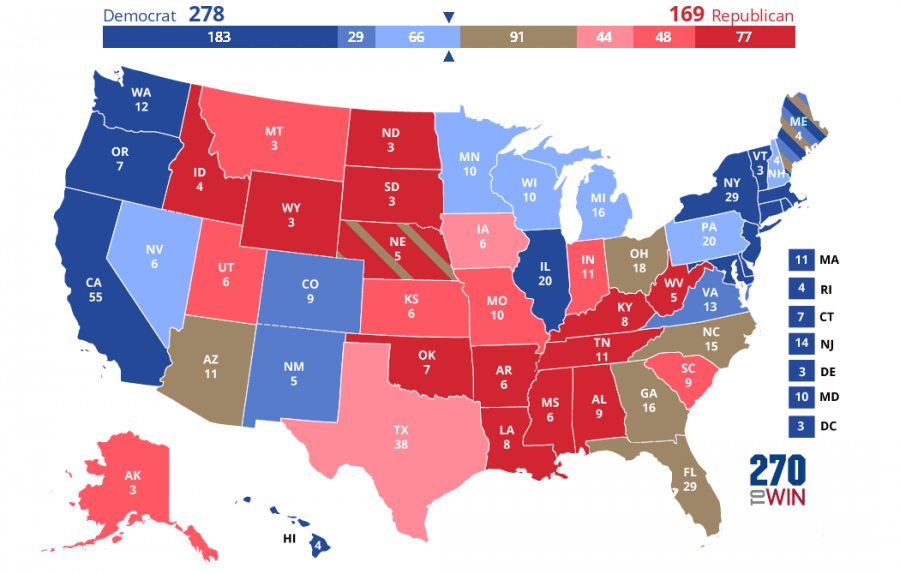 The current election prediction map has Texas as leaning Republican. What would happen if it shifted left? Photo Credits: 270 to Win

Texas is seeing a shift in its residents’ politics; a FiveThirtyEight Survey of registered Texas voters found only a three percentage point difference reported between Republicans (42%) and Democrats (39%). Even more surprising is that same survey showing Biden beating Trump by 5 percentage points among these voters (48% – 43%). What pushes Biden over the edge is the 53% of Independent voters and the 9% of Republican voters deciding to support him in this survey.

While the difference between Trump and Biden in this survey is outside of its margin of error (2.4%), it still really is too close to call from just one survey. For example, a CBS News Poll has Trump beating Biden by 1 percentage point (46% – 45%). This one is within its margin of error (3.3%).

What these polls illustrate is that Texas may have a chance of turning blue for this upcoming presidential election; if it happened, it would be the first time since 1976. While most outlets still have Texas leaning Republican, the race for Texas’ vote is the closest it’s been in a while.

So why is this happening? There are a couple of reasons. First, approval of Trump is universally low. Disapproval rates are consistently between 50% and 60%, and approval is generally in the low 40s (FiveThirtyEight Presidential approval polls). This low approval has to do with a lot of things, namely his mishandling of the Coronavirus pandemic, being impeached for abuse of power, and alienating minority voters by way of disparaging comments.

The second reason is not unique to Trump, but rather an overall demographic shift throughout Texas that is resulting in more democratic voters. Big cities in Texas have turned decisively liberal in the past 15 years, and the suburbs are following suit(New Republic: Blue Wave). A  younger generation that is statistically more progressive is aging in, while an older generation that had more conservative voting trends is aging out. Trump just sped up the process of mobilizing progressive voters who are often unrepresented at the polls.

So what would it mean if Texas turned blue for this upcoming Presidential election? It would pretty much guarantee Biden’s win (270 to Win). If Texas voted for Biden, even if every single toss-up state voted for Trump, Biden would still win. With 38 electoral votes, Texas has a huge amount of influence on the electoral college, only beaten by California with 55.

Regardless of Texas’ vote, this election will be a close one. So if you are eligible, please go out and vote! Democracy only works if the people make their voice heard.