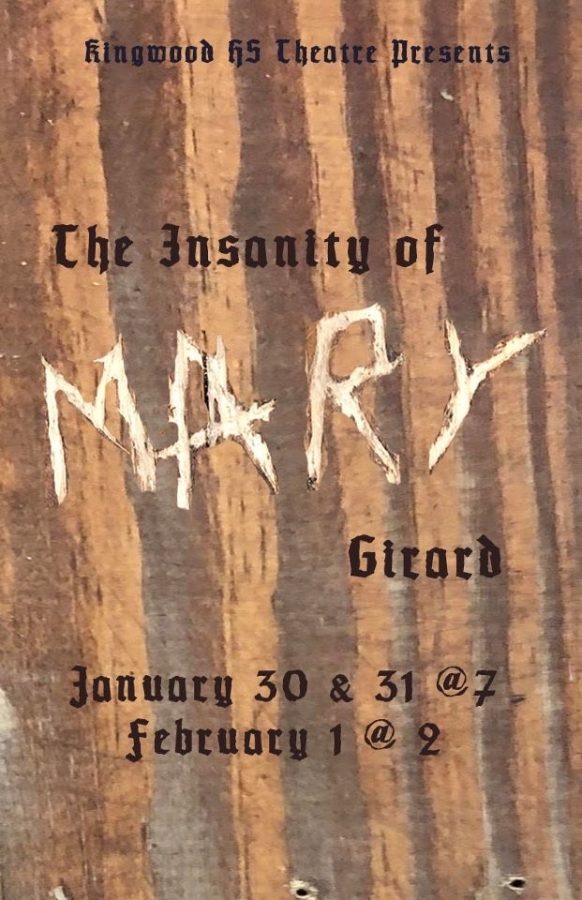 On Friday, March 13th. The company performed a one-act version of the play, The Insanity of Mary Girard. The story follows the life of a woman named Mary Girard (Cami Kristoff) who became pregnant with another man’s child and is consequently thrown in an institution even though she is actually sane of mind. The audience follows her journey of eventual insanity as she visits strange people called the Furies (Katherine Rhodes, Diego Cotte, Julia Goodman, Rachelbeth Reynolds, Kennedy Olson) the Warder (Landyn Cline), her mother Mrs. Lum (Julia Fisher), her husband’s mistress Polly (Sophia Hoffman), Dr. Phillips (Ben Erb), and Mrs. Hatcher (Kenzie Wagle/Emily Escareno) and finally the man who put her in the cell, Mr. Stephen Girard (Will Soto). These characters make the audience question whether they are physically in the cell with her, are simply memories, or even just voices in her head.

Interestingly, although the play is fictional, Mary and Stephen Girard were real people. In fact, Stephen Girard was one of the wealthiest men in America during the 1800s and Mary was actually sent to an insane asylum because she was experiencing “erratic” behavior and shortly after she gave birth to a girl. The father of the girl was unknown and died 3 months after it’s birth. After Mary’s death, Mr. Girard asked she be buried on the hospital grounds in an unmarked grave. Additionally, Mr. Girard made large donations to the hospital where she was held and still to this day the institution refuses to release information about Mary Girard. They’re reasoning why: they are “not permitted to discuss any patient information” (Stacey Peeples, Curator and Lead Archivist at UPHS).

During the competition, the company must set up and strike their show in under 7 minutes and perform in under 60 minutes. Previous to their first competition the OAP (one-act play) company had attended clinics at Atascocita High School And Carnegie Vanguard High School.

While the cast was nervous for the competition they were ready. They had been rehearsing since before Christmas break and knew the show by heart. After their performance, they rushed backstage and started their strike. Then they headed to awards.

Summercreek, Atascocita, and Kingwood all advanced to Bi-Districts. Additionally, Kingwood’s Cami Kristoff (Mary), Ben Erb (Dr. Phillips) and Lucy Sullivan (Stage Manager) all won individual awards. Unfortunately due to COVID-19 it is unknown what will happen to the rest of the UIL season, whether it will be postponed or canceled. Overall, Kingwood Theatre created a beautiful show and made Kingwood High proud.